The annual Two Wood Triples day was held at Victoria on Sunday 11th August 2013 and this year it was sponsored by a member, Bill Nicholls. After last years’ event Bill asked if he, together with his daughter Lorraine, could sponsor the day. Regretfully Lorraine died earlier this year and so the day was held in memory of Lorraine.

Eight teams of three players completed 40 ends of two wood triples over a period of 4 hours. This was more of an endurance event than a game of bowls. At the end of the day of some impressive bowling the winners, who were undefeated in their four games were Peter Wyatt, John Newman and Bryan Stock with 8 points. In second place with 6 points were Graham Richards, Terry Gatehouse and Roger Rockett. Third place went to Nathan Stocker, Nick Sell and Mike Cooper with 6 points but an inferior shot difference.

After the game the players were provided with a very nice meal prepared by the ladies and the Captain, Mick Manning, when helping Bill present the trophies thanked him for his generosity in sponsoring the day and Bill remarked that Lorraine would have loved it. 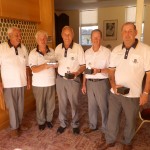 Those members who were not able to attend the day missed this sumptuous meal – even the ladies got stuck in!

The first competition on Sunday 23rd June was the Open Triples played over four games with a final play off. Team Stocker from Victoria Bowling Club comprising of father Mike Stocker and sons Lee and Nathan won all their group games and then were successful in the final playoff. This is only the first season for Lee and Nathan so this was a magnificent achievement. 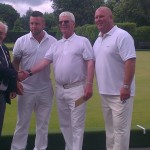 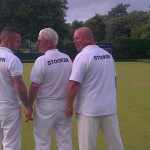 Other Victoria Bowling Club successes during the competition were:

Mike and Nathan Stocker reached the semi-final before losing to the very experienced pair of Adie Burbridge (Worcester) and Mike Ricketts (Ledbury).

Mike Cooper and Colin Gazzard were runners up to Burbridge and Ricketts.

Nathan Stocker and Tiffany Ellis had a very good run before losing in the quarter-final to a pair from Kineton and Barbourne.

Carol Webb partnered by Don Towie (Clarence) won the event against the pair that beat Nathan and Tiffany.

Lee Stocker and David Fairhurst partnered by David’s dad Jim and Bob Rossiter (Clarence) were runners up to a four from Worcester Brotherhood.

A very good week for bowlers from Victoria!

Nice ride in E***’s Merc. – only concern being that E*** casually mentioned during the journey that their Triples rink was unbeaten this season to date!!

Drawn on rink 5 – against two Clevedon players that I recognised as “outstanding” when last I played there!  One was leading against me! Their Captain of the day was their Skip. (An obviously loaded rink!).

The rink was notoriously “odd” (unless you knew it – which they did!) Soon we were losing 11-3.

However, joy! As our Club Captain arrived to watch the game, and, presumably assess our abilities – we levelled at 11-11. (I needed to impress said Captain as I am striving to regain my place in the Saturday “C” Team from last year.) (I did play for the D’s against the C’s a fortnight ago – and was on the only winning rink for the D’s!! – So far un-noticed!)

However, once the Captain’s back was turned – we resumed normal service and succumbed as did four of the six rinks.

Over tea, my opposite number casually mentioned that he was leading in the Turnbull Cup match the next day – and had been practising (bowls!!) with the young lady behind the bar that morning. The young lady in question is an England international!! Why do I pick leads like that to play against? (Bet it’s easier in the Saxons!!).

I should have known better than elect to play against a Welsh side!!

(Though I do love the Welsh after studying at Trinity (Carmarthen) for some years – and rubbing shoulders with Sid Judd (who captained Cardiff and Wales – Rugby) and coming from the same Uni. as Dewi Bebb and Barry John)

I well recall a Welsh Professor, during his lecture, eyeing some of the English students and announcing “Do you realise that we were a civilised race when you were running bare-bottomed through the bogs of Bavaria!!” Wonderfully delivered with Welsh accent.

Things started to go wrong when I arrived an hour before the scheduled match (It was an early 1.30 pm. Start) – and the car park was full. However, I successfully backed down the side lane (first in – and subsequently blocked in by four others!) – without losing any wing mirrors!! (This, I thought might be a good omen!)

As I arrived some of our ladies were just finishing a CountyMatch. I gathered our Ladies had been winning 20-3!! (They then lost by one on the last end!!) – Another bad omen?

I arrived on Rink 2 and offered to collect the Rink money for the Skip. A lovely lady tried to pay me £2 and I explained, at some length, that although it was extremely generous of her to try to pay a rink fee, as a guest it was unnecessary – ‘though, if she wished to pay her own team for the game, that would be fine. She appeared rather surprised and explained that she thought she was playing as lead for Victoria!! She was also wearing Victoria’s uniform. Why did I not realise it was C**** W***? What could I say???!! Things were certainly not starting well.

I apologised profusely, explained that I was simply an idiot and then spent the opening ends of the match grovelling as is my wont. (I’m well versed in grovelling – having practised for years with Selectors!)

Anyway, in order to redeem myself, I put all my woods within inches of the jack for the first three ends!! As number two, I took great delight in turning the numbers over on the scoreboard. After three ends we were winning 7-0 !

Time for tea. As usual I drew the short straw, found myself on Rink 2 table, and, as first to arrive – I won the tea pot. Naturally I spent the break pouring tea, making coffee, still grovelling to C**** – and finally, carrying the tray plus empties to the kitchen.

Everything changes after tea!! Things were about to get worse!! The weather forecast had predicted it would be the finest day so far this summer. For the first time in about twenty years, I had taken my wet weather gear out of my case and left it at home!!

It was now raining – quite hard!!

I raced to the changing room – forgetting that my gear was at home. (I did “borrow” a jacket from the long line hanging there and felt very guilty!)

The game continued. I was keeping the score and went to the Main Scoreboard after 15 ends – and was admonished by a Senior Official – who told me that I was one of those responsible for upsetting the numbers of numbers in the blue boxes at either end of the scoreboard because I was taking both sets of numbers from the same end!!. (It is some time since I had the job of Number two – and I do remember taking numbers from either end in those days. – I forgot!!).  I thought perhaps if Rinks 1-3 take the numbers from one end and rinks 4-6 take the numbers from the other end – it would have the same effect. (But it was not the time to have a debate; it was raining; – and he was also a Selector!!) Tail between legs – back to the game!

Wet, depressed, disillusioned. The mood lasted all of ten minutes!! A drink for my opponent – he wanted a Bells whisky!! Why not??!

I went home. Christine knew I had lost!

I went on e-bay and ordered Dylan Thomas’ “Under Milk Wood” read by Richard Burton. (I have other recordings). – A wonderful Welsh word-picture!